1 Round At A Time

Get Your First class free! 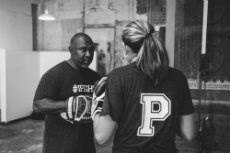 Joe Buckner is the Founder and Visionary of Fort Collins’ only boutique boxing studio, Beautifully Savage: The Art of Pugilism. Born and raised in Fort Collins, Colorado, Buckner has a passion for the community and helping others to reach their goals and dreams.Buckner spent his youth as a multi-sport athlete and later went on to play college football. After a series of unfortunate events though, life took an unexpected turn for Buckner and led to a season of homelessness. Determined to fight for a better life, he became more motivated than ever to salvage his dreams and overcome even when defeat seemed imminent. Over time and with a lot of hard work, he paved his way to becoming a successful businessman and now entrepreneur. The many obstacles Buckner had to overcome and his persistence in the face of failure birthed a deeply rooted passion to help others fight for their own dream – specifically through boxing.Now, with twenty four years of sales experience, Buckner is on a mission to teach others how to fight their own internal battles through self-reflection, dedication, and persistence. Buckner has founded Beautifully Savage boxing gym. By teaching others the art of boxing and motivating the community through fitness, Buckner is creating a space for others to fight for their lives and overcome barriers. Declaring that “Fighting Solves Everything,” Buckner believes each person only needs to unleash their inner fighter to attain the life they have always dreamed of. Joe has dedicated his life to helping people reach their full potential through the sport of boxing as well as in his motivational speaking career. Joe was a featured speaker at TedX Arena Circle in September 2016.